Roll twice. First time you get a result, you get the effect listed under "first". The second time it's the second. If you get a "second" result you should roll once more. If you want you can just keep rolling until you're satisfied with your character.

1. first: Eyes have strange pupils (catlike, goatlike, etc.) or no pupils at all
second: Eyes literally glow in the dark, like lidded light bulbs
2. first: Chin, cheekbones, or bridge of nose are so sharp you can literally pierce skin and draw blood, but it's too awkward to use as a weapon
second: all the angles of your body are sharp and abrupt, like someone carved you out of matte, skintoned crystal
3. first: Sections of body are covered in fur
second: entire body is covered in fur so thick that, while you yourself can see between the hairs, people have to get very close to see even your eyes or mouth
4. first: Two features on your head (eyes, nose, mouth, ears) have their functions exchanged (for example: you eat with your nose and smell with your mouth)
second: A feature on your head has its function exhanged with either your asshole, your sex organ, or your breasts/nipples
5. first: Additional head - the second head is either identical to the first one, or roll once more separately for additional second head traits (the traits rolled for the second head always apply to the second head, not to the neck down)
second: 1d4 additional heads. Some of them may be attached to unusual parts of the torso
6. first: Tail, 8d20 cm long (type of tail is up to you)
second: The tail is attached to your head (back of head, chin, forehead, etc.)
7. first: Tongue is 5d20 cm long
second: Tongue is also tubeshaped, like a worm, and 3-5cm thick
8. first: 1d6 extra arms
second: 1d10 additional hands (attached to various parts of your body - no additional arms)
9. first: Your hair literally has a life of its own. It's attached to you and absorbs nutrients through your body, but will often move in unexpected ways, like stretching towards the sun or shaking off water like a dog
second: You are a magical intelligence residing in your hair. Your entire body, including your head, is essentially a brainless construct serving as a vehicle for the hair. You may or may not be terrified of barbers.
10. first: Bones are very bendy and rubbery, to the point where you can bend the middle of your forearm almost as well as your elbow
second: No skeleton at all - you are like a puddle of skin containing muscle and guts. Move like slime, limbs like tentacles. You can effectively impersonate a humanoid if you find and enter an exoskeleton.

world map based on an old rpgmaker project 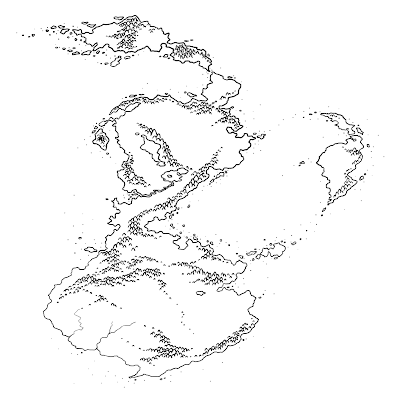 1. a terrible villain
2. an attractive stranger
3. a member of your family
4. a great hero
5. someone of great authority
6. a monster
7. someone poor and desperate
8. someone who didn't deserve it
Upplagd av tveir kl. 14:56 Inga kommentarer:

Four Githzerai in a gang, five Githyanki pirates, and a Fire Genasi.

So I played Beyond the Wall and Other Adventures 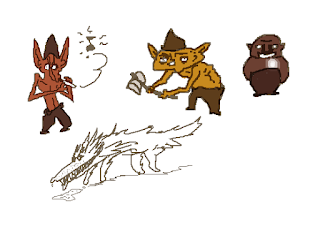 Ran the Goblin adventure. Looked to German and Nordic folklore for inspiration, particularly the Kobold. Short, subterranean creatures in red, orange, or black skin and miner's clothes, living in caves and mines. They carry flutes to scare people, shake their heads back and fourth, and/or have luminous circles where a human's heart would be. Often fire-themed.

Rolled Darkness and Fear, so the shining heart-light seems thematically appropriate, as does connecting the fear save to the sound of their flute. Rolled a totem for treasure, so I threw in a bit about them worshipping Bergsrået.

Most of the villagers got killed, players tore down or burned most of what remained and abandoned the village to settle with their neighbors. 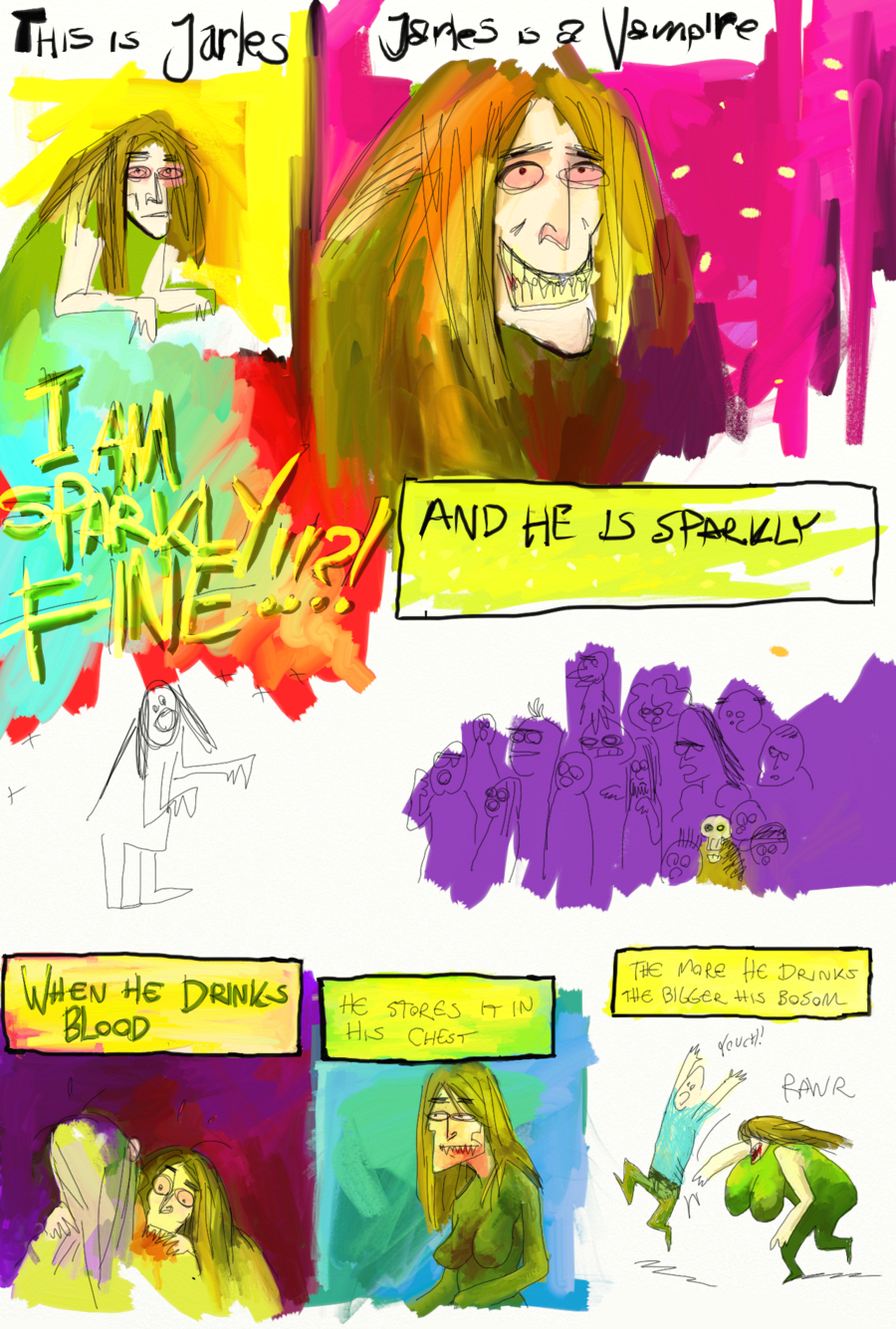 Stores blood in chest. Stabbing their bosom, when large enough, will cause them to bleed everywhere and be very cross with you. Often walks hunched over, hunching increasing substantially with weight of chest. Quick and agile, regardless, often swooping and bouncing around like hyperactive children.

Sparkles in sunlight. Takes no damage, but easy to spot. If skinned, its sparkly hide can be used to craft a sparkly cloak. Usually takes two or three vampires for a normal-sized cloak.

Feeds with tongue. Tongue is a long, round, sandworm-like thing, ending in a small, round mouth with teeth that hooks into your neck and drains you. 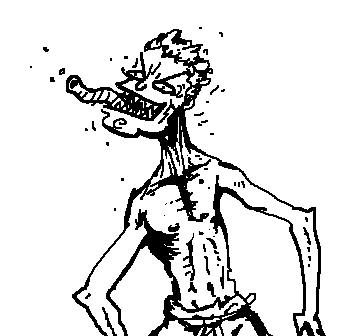 80% chance of a feverish concern for the Masqueradeᵗᵐ. In practice this means that they feed as little as possible and dislike talking about their powers. The concerned ones are noticeably skinnier. They think this demonstrates restraint and nobility. The remaining 20% think of this as an eating disorder.


These "Dry Ones" commonly deal with the lack of feeding by smelling people.
Upplagd av tveir kl. 14:16 Inga kommentarer: